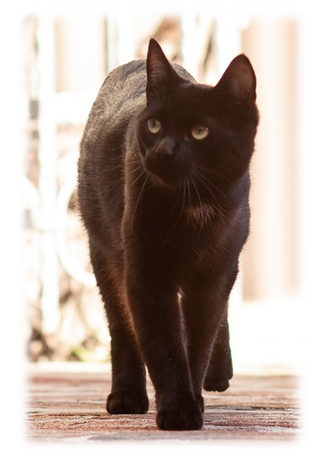 "Nero" is the only out-door cat in the house and comes and goes more or less reliably as he wants.
"Nero"'s story begins tragically. At the age of about 5 - 6 weeks, less empathetic human beings tried to get rid of him and his brother. The two young males were "discarded" in a duct of a garden. Both had luck and were discovered by nicer 2-legged people and lovingly coddled up.

But where to go with these two?
That was unclear. I heard about the story through a colleague at work, and immediately I realized that we could accommodate one of them. So "Nero" moved to us, and his brother also found a home. The black cat, however, was, unlike the noble cats, not able to live as pure apartment cat. He is attracted by freedom, and so he now enjoys it during the day in our village. Every day we hope that he is smart enough to avoid all dangers, and so far this seems to be the case. In the evening, he comes home, especially to our son Nick and in his bed.
"Nero" is one of a kind with entertainment value.
We hope that he will be with us for a long time to turn our lives upside down.